Yes, we are More Than Curds.  But does that mean we should shun our beloved dairy form our blog?  I think not.  Although we here at MTC strive to bring you an overview of Wisconsin that reaches far beyond the simplistic cheese, beer, and Packers stereotype, we also must admit that we really love our cheese, beer, and Packers!  So having said that, I present you one of our most traditional and unique cheeses from Wisconsin: Limburger. 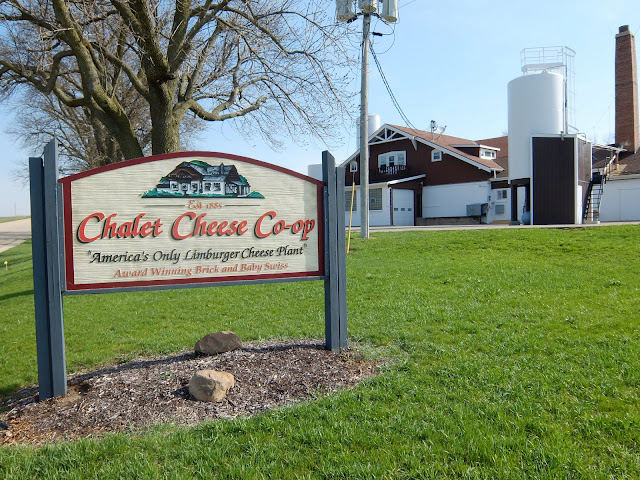 Yes, Limburger.  The name alone will conjure images of cartoon mice that won’t eat the infamously stinky cheese.  But I believe that was drawn by one who has never tasted the amazing taste and texture of Limburger.  Yes, it has a pungency to it, but Limburger is fantastically delicious.  And it’s only made here in Wisconsin.  At one time, Limburger was a favorite working-man’s cheese and was produced by about 25 cheese factories, though it’s popularity waned as the American palate for cheese favored bland, mass-produced cheeses that didn’t require much care. 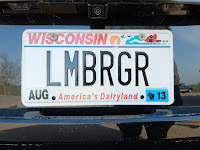 We begin driving south, to Monroe.  Limburger, although originally from Germany (or Belgium, depending on who you ask), is now only traditionally made by hand in one place: Chalet Cheese Cooperative.  Myron Olson, the only Master Cheesemaker in Limburger in the world, is our guide.  This man is so into his Limburger that even his license plate sings its praises.  The Chalet Cheese Co-op was founded in 1885 by five farmers as a cheese co-op and still operates as a co-op with 21 family farms today.  Myron got his start in the factory as a janitor when he was in high school and worked his way up into the age-old craft of cheesemaking.


The Co-op brings in 100,000 pounds of milk  (roughly 11,000 gallons) a day, which might sound like a lot, but is actually quite small for a cheese factory (some larger plants are processing over two million pounds a day!).  The cheese is pasteurized and then taken to the vat for coagulation.  Bacterial cultures and enzymes are added to separate the curds from the whey (at this point you have what is essentially cottage cheese).  The whey is drained and the curds are pressed into small blocks.


Once the blocks are formed is when the real magic happens.  Unaged Limburger is a lot like Feta: salt and crumbly.  To produce soft texture, buttery flavor, and pungent aroma the cheese must be ripened in a special aging room.  They get a bath of special bacteria and yeast which works on breaking down the proteins in the cheese.  Only at Chalet is this done by hand.  The room is kept at a cool 50 degrees with about 80% humidity.  When the cheese plant moved to its current location in the 1960’s, they found that the cheese wasn’t ripening properly.  They went to the original plant and brought in a few of the pine boards from the old aging room and found that the natural cultures in the wood is what did the trick!  They still use this same culture as when the plant opened in the 1880’s. 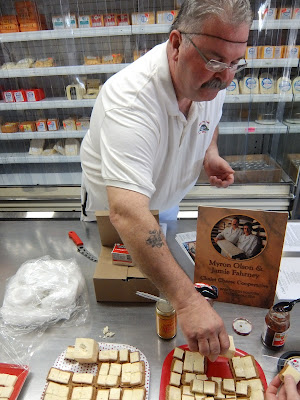 Myron is the last Limburger maker in the country, though he is starting to see its popularity come around.  Most people born after 1960 don't care for the full-flavored cheese, but as artisinal cheese becomes more popular, he's hoping Limburger will too. Maybe it's just the name--if was named "Olson's Private Reserved Washed-Rind cheese", then maybe more people would be more likely to try it!

Young Limburger will have a mild flavor and firm texture.  As it gets older, the texture will soften and the smell will get really intense!  For beginners, I usually serve a medium Limburger with the rind cut off.  The way my German grandpa and I eat it is old and smelly!  For a true Wisconsin lunch, serve it on pumpernickel rye with Dusseldorf mustard and raw onions.  All washed down with a beer, of course!