Wisconsinites drink a lot of milk and beer, and the brandy old fashioned is the cocktail of choice at Euchre games across the state.  But when the winter sets in, Wisconsinites turn to something to fight off the cold.  Here's a few drinks that have established themselves as wintertime favorites. 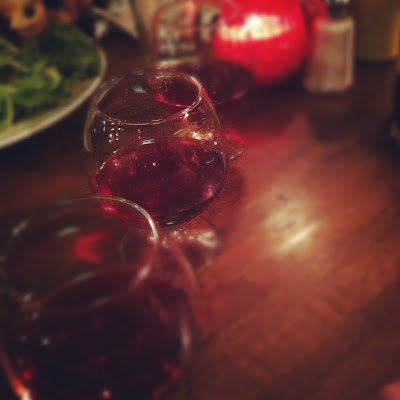 Cherry bounce is a simple infusion of cherries and sugar into a spirit.  The town of Fristhden, England claims to have invented the mix and it was a favorite of George Washington, who had his own recipe for the liqueur.  In Wisconsin, cherry bounce is mostly associated with Christmastime.  Despite its small size, Door County is the fourth-largest cherry producer in the country and attracts hundreds of thousands of tourists to "pick-their-own" during harvest in early August.  While many of these cherries will be packed into pies, sauces, and other great dishes, many Wisconsinites will pack them into a jar to steep in brandy.  The fruit will do its magic through the months, ready to be enjoyed for Christmas.

In Madison, The Old Fashioned hosts a cherry bounce party every November.  They offer three varieties: vodka, brandy, and bourbon.  Many people prefer the spicy tones of the bourbon bounce, but I liked the sweetness of the brandy bounce.  Typically it is consumed neat, but will also be used in a variety of cocktails and recipes as well.  Cherry bounce is very simple to produce and makes wonderful Christmas gifts.  Try it yourself this summer and enjoy a long-beloved Wisconsin tradition! 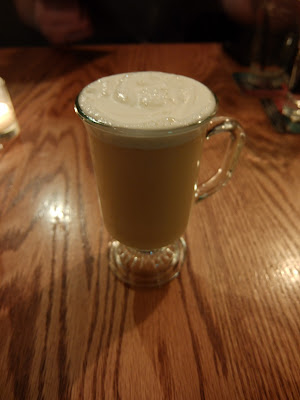 Everybody across the country is familiar with eggnog (unfortunately, mostly from the coolers at the grocery store), but there's an alternative that is arguably more tasty.  Although invented by an Englishman, the Tom and Jerry is almost unheard of outside of Wisconsin.  Whereas eggnog tends to be more rich and heavy, a proper Tom and Jerry will be frothy and not as thick.  Essentially, it's whipped egg whites with the yolks and milk mixed in.  Add your brandy and rum and you've got the best après-ski drink this side of the Atlantic.

The Tom and Jerry are making somewhat of a comeback, but at their heyday in the first half of the 20th century, some people had their own serving bowls with "Tom and Jerry" painted on the side in Old English font.  If you hunt through the second-hand stores long enough, you may come across one of the treasures, harkening back to a more festive era.

Essentially mulled wine, this variety comes from the German countries.  Glühwein (German for "glowing wine", named after the hot irons used to heat the drink) is a heated drink of red wine mixed with spices and citrus.  It is sometimes spiked with additional alcohol (typically brandy or kirschwasser) and occasionally served in small ceramic boot-shaped mugs, though is is uncommon in Wisconsin as it is a relatively recent German invention.  Glühwein is perfect for serving large crowds and is very simple to make!

So start the fire, curl up in a blanket, and have a glass or two.  Winter is here, but we don't have to be cold!