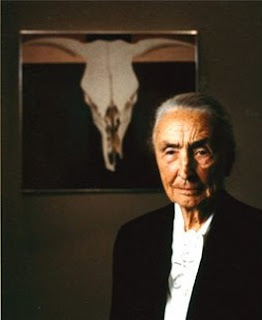 Wisconsin has had a fair share of famous natives.  Frank Lloyd Wright has been the subject of a few posts on MTC, but there are so many other great Wisconsinites.  For example, the great Georgia O'Keeffe.

O'Keeffe was born in 1887 on her family's dairy farm outside of Sun Prairie.  The second of seven children, O'Keeffe showed an early aptitude for creativity.  By age 10, O'Keeffe and her younger sister were taking lessons from a local watercolorist.  She began boarding school in Madison, but the family relocated to Williamsburg, Virgina.  O'Keeffe, however, stayed in Madison to finish her studies and joined the family out east after high school, albeit not for long.  She returned to the Midwest to study at the Art Institute of Chicago before moving to New York to study at the Art Students League.  It was there that she won the still-life prize for her work Dead Rabbit with Copper Pot.

Despite the praises lauded on her, O'Keeffe left the world of fine art and moved back to Chicago to work as a commercial artist.  Languishing in her creative abyss, it wasn't until she met Arthur Wesley Dow in 1912 that she found inspiration again.  Through the guidance of Dow, O'Keeffe learned how to use painting as expression of an artist rather than the old methods pressed upon her at the art schools.  During this time she took a job at West Texas A&M University and fell in love with the American Southwest.

She first gained national attention when some of her charcoal drawings were shown by the photographer Arthur Stieglitz at his 291 gallery in New York in 1917.  They began writing each other and by 1918, O'Keeffe was back in New York focusing on her art full-time.  The two fell in love quickly, and starting living together.  This caused a bit of a stir as Stieglitz, 23 years her senior, was also still technically married. When his divorce was finalized in 1924, the pair quietly married.

O'Keeffe became a favorite subject in Stieglitz's photography.  Many of her portraits were nude, and by the time her retired in 1937, O'Keeffe had been photographed over 350 times by her husband.  Surrounded by creativity, and spending summers in their idyllic upstate home, O'Keeffe began her iconic large-format nature paintings.  Petunia No. 2 became her first flower painting in 1924 -- a subject that came to define her as an artist.  However, when her Black Iris III was first showed, her critics claimed her work was too sexual.  She began to paint more literally to avoid the unwanted perceived undertones of her work and briefly focused on landscapes.

Desperate to stretch her creative legs, she stopped summering at the New York house with the Stieglitz family in order to travel to Santa Fe.  There she went on long backpacking excursions with her friend Rebecca Strand.  They ended up renting a house in Taos and not long after, O'Keeffe decided to move there permanently.  She bought Ghost Ranch which became an artists haven, hosting the likes of Allen Ginsberg, and Ansel Adams.  By now her paintings were fetching the highest prices that any living artist has claimed and were being shown throughout the country in places like MoMA, Chicago Art Institute, and the Whitney Museum of American Art.  Her painting Summer Days made her internationally renowned and remains one of her most recognizable works.

In 1946, her husband died suddenly, forcing her to move to New York to settle the estate.  After traveling to clear her head, she painted her iconic Sky Above Clouds IV, inspired by the view while flying over clouds.  She continued to receive praise from her work and was elected to the  American Academy of Arts in 1962 and Letters and the American Academy of Arts and Sciences in 1966.

By 1972, O'Keeffe had lost most of her eyesight due to ocular degeneration and hired a young potter named Juan Hamilton to help around her estate.  She abandoned painting, but continued to do charcoal drawings and began working with ceramics under the guidance of Hamilton.