These two simple words can conjure up both happy childhood memories of water slides and pancake breakfasts while at the same time sending shivers to kitsch and tourist traps to the part of the brain that is responsible for shame in one's homeland.  But More Than Curds is here for you!  We know that the Dells will be forever linked with cheesy attractions (and not the good kind), but that doesn't mean that we can't try our best to but the Dells in good light.  So, MTC would like to inventive you to better know this town.

Wisconsin Dells is named after a series of geographical landmarks of the same name along the Wisconsin River.  These are narrow sandstone gorges that are unique to this area of Wisconsin.  The area has been inhabited for thousands of years and was settled by European peoples in the 1850's.  Originally named Kilbourn City, Wisconsin Dells was a lumber town until a railroad bridge that cross the Wisconsin River was erected.  As tourists trickled in to see the natural landscape of the Dells, the town eventually renamed to Wisconsin Dells in 1931 to be more closely equated with the tourist attraction that brought in so much money to the town.  Around that same time (1927), the man-made Lake Delton was constructed and the town of the same name was founded. Now, because of the seamless proximity of Lake Delton and Wisconsin Dells, the two towns are usually grouped together as simply "The Dells". 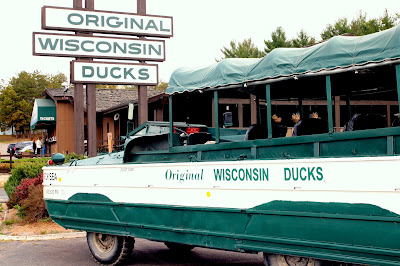 Since the 1950's, the Dells has been a family vacation hotspot.  After WWII, amphibious military landing craft, known as "Ducks", were used to give tours of the natual beauty of the area.  Soon tourist traps such as the Wonder Spot, Storybook Gardens, and Tommy Bartlett's Thrill Show brought in vacationers from across the Upper Midwest.  The 1970's saw the first of many waterparks open in the Dells, and more recently the town has been home to casinos and outlet malls. 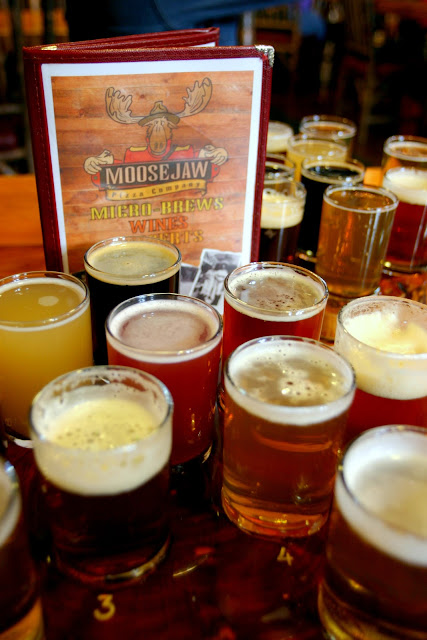 To experience a non-kitschy Dells excursion, we took an easy 45-minute drive north from Madison and stopped for lunch at Moosejaw Pizza & Dells Brewing Co.  Since 2002, Moosejaw has been making "The Best Pizza In Town" and Dells Brewing Co. has been making an impressive 20 brews to wash it all down.  While we did not order the pizza (it was a Friday--we got the fish fry) we did get a sampler of the beer.  While most were ho-hum, the Raspberry Creme Ale and Coffee Stout were surprising.  Compared to New Glarus Brewery's Raspberry Tart, this one was great!  I'm not even a fruit-beer fan, I thought this was delicious.  Raspberry flavor came through well without being sugary, syrupy, or too tart.  This would make a great summer session beer.  And the coffee stout was the best I've every had.  On the nose and flavor, dark roasted coffee beans dominated this malt-forward brew.  Rich flavor with a full body that would be welcome all winter long.  Fun fact: Dells Brewing Co.'s Jamie Martin is the only female brewer in the state! 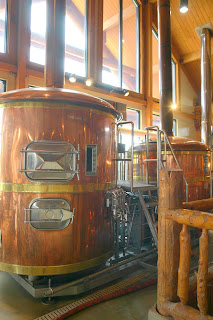 After getting our fill, we went to the Originals Duck Tours (the ones from the 1950's).  We had planned to go on one of the boat tours (which I personally think are better because of their route through the Upper Dells) but time and money constraints directed us to the Ducks.  It proved to be a fun and scenic way to spend an afternoon.  This one-hour tour will take you through the woods before plunging into the Wisconsin River, up to Lake Delton, then back through the forest.  The drivers have some pretty hilarious jokes (read: one-line groaners), and they're usually college-aged kids just trying to earn money for tuition.  Be sure to drop a buck or two in their tip jar at the end of the trip.  It is difficult to capture the gorgeous scene of the Dells, but check out some photos of the trip. 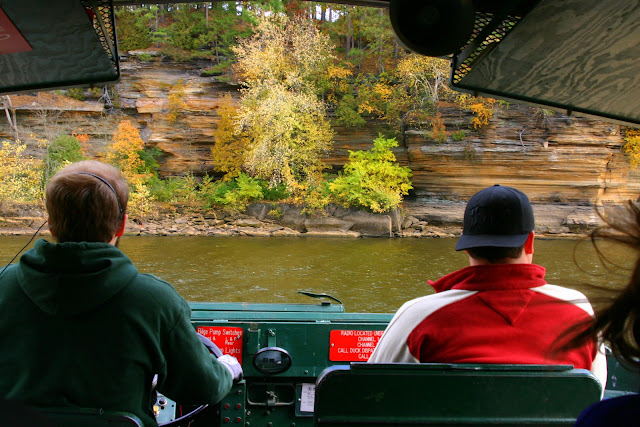 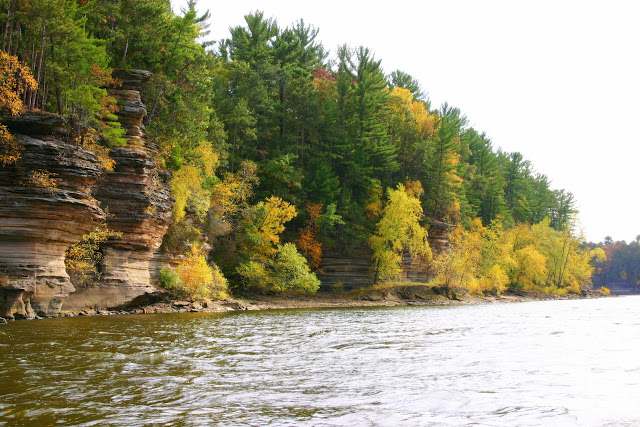 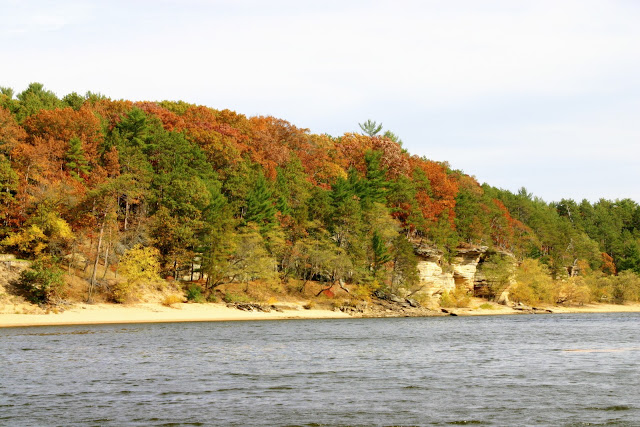 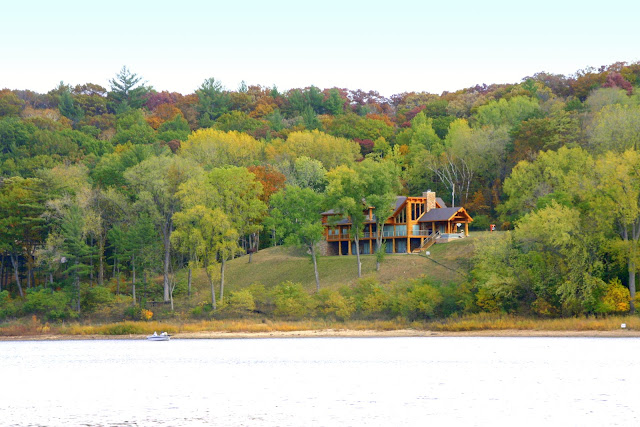 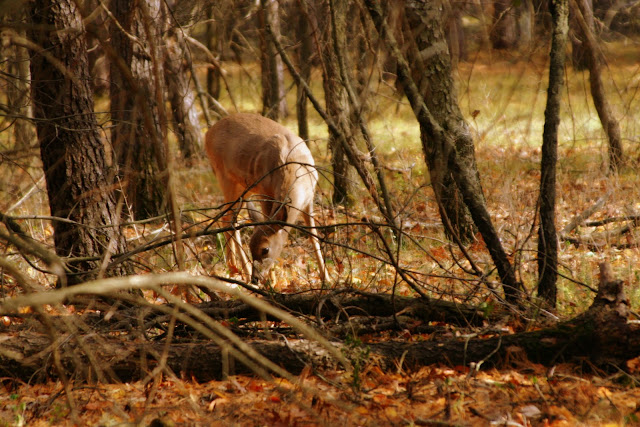 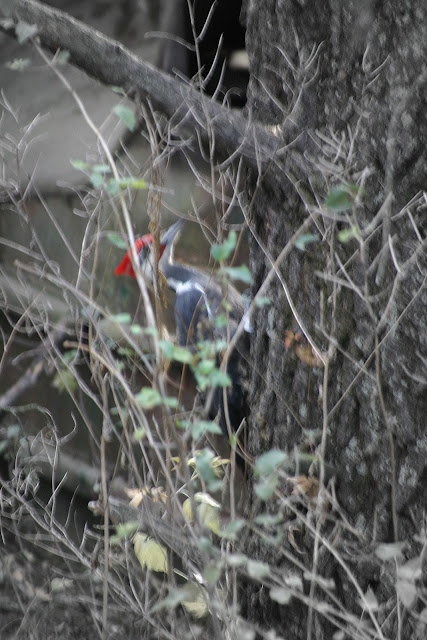 We learned three lessons today:
1) The Dells can be fun without being a parody of itself--don't fear piling into the station wagon next summer
2) The Dells may be even more beautiful in the autumn.
3) If worse comes to worse, at least they got a brewery!
Posted by Greg at 11:46 PM