This past weekend, at the ripe ol' age of 26, I went to my first Brewers game at Miller Park in Milwaukee! It's an iconic experience for any Wisconsinite. 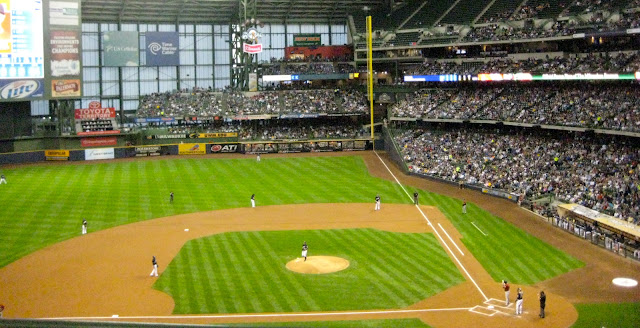 The group that I traveled with was pretty pumped to see the "Brew Crew" play, but everyone was significantly less enthused about paying eight bucks at the park for a Miller Lite. Yeeeeesh! So we decided to take a detour to grab a couple of beers before the game at a new, local brewpub in Oconomowoc, Wisconsin. 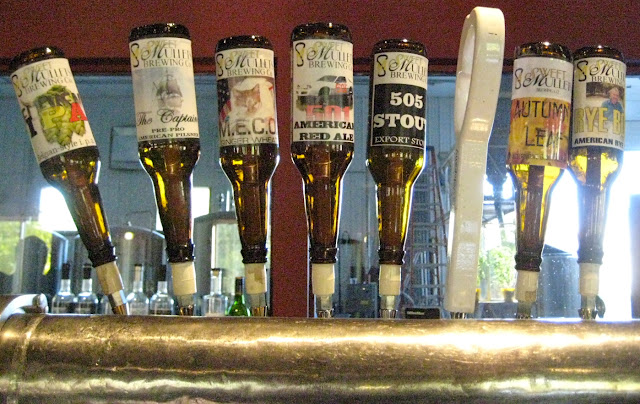 Sweet Mullets opened this past March and offers an ever-changing lineup of microbrews. We found out that the brewery is called Sweet Mullets because the head brewer had a really sweet mullet at one point. Mullets aside, this guy knows how to brew! When we visited, they were featuring: Eleven - Belgian IPA; The Captain - Pre-Prohibition American Pilsner; MECO - Ginger Wheat; 501 - American Red Ale; 505 - Export Stout; Autumn Leaf; and Rye Bob- American Rye. 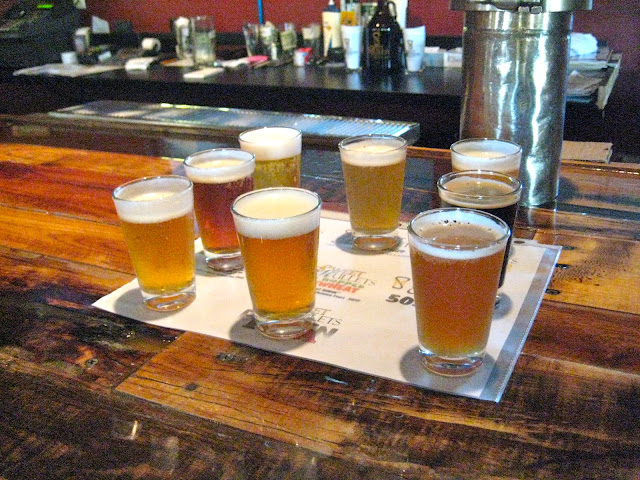 The "standouts" for our group were the ginger wheat, the stout, the red ale, and the pre-prohibition pilsner. This was a really wonderful brewery with a skilled brewer. Typically when I taste a beer flight,  maybe one out of 10 beers is worth a second look. At Sweet Mullets, half of the beers we sampled were complex and noteworthy-- the other half were also excellent, enjoyable drinkers. It was honestly really difficult to pick which beer to get a pint of after the flight. All of the beers were that good.
I ordered the ginger wheat because I'm a sucker for well-executed wheat beers. It had great flavor and the ginger didn't overwhelm the nose or the taste of the brew. Other members of our posse ordered the stout, which was very smooth and full bodied. It wasn't bitter like some stouts and had a rich nose with hints of caramel. The red was malty but with an unexpected (and skillfully done) dry finish. The pilsner tasted yeastier than a typical pilsner, but that gave it the satisfying complexity of an unfiltered beer. 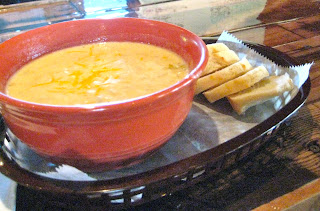 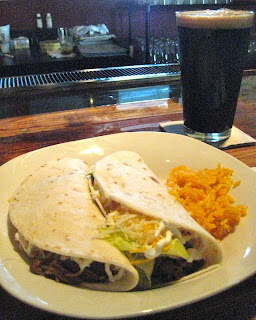 The food at Sweet Mullets was excellent as well. The chipotle beef tacos were a nice alternative to most "pub grub" you find at Wisconsin bars. Their homemade chicken corn chowder was also a great Fall choice. The brewpub offers cheese boards and (of course) cheese curds.

The brewmaster at Sweet Mullets, Mark Duchow, also makes his own pickled eggs that you can purchase for a dollar a piece. According to our bartender, Mark thinks that "every bar needs pickled eggs." We were so impressed by his beers that we decided to test out his pickling prowess as well. It was a memorable experience! It essentially tasted like a spiced hard boiled egg. The pickled jalapeno garnish was nice touch as well. I recommend taking the plunge and trying a pickled egg if you're in an adventurous mood. The eggs are purchased fresh from a local farmer in Oconomowoc :)

You can follow Sweet Mullets on their facebook page where they post new brews and special events that they're running at the brewpub! The brewpub is located at N58W39800 Industrial Road, Suite D, in Oconomowoc.
Posted by Erin at 11:41 AM