My grandfather turned 90 this year.  This is a considerable age for anybody, but grandpa represents the last of a very unique minority in Wisconsin.  Despite our sizable German population, not many people actually speak the language.  My grandfather is last of a generation growing up in Wisconsin that spoke German as their mother tongue.

The history of Germans in Wisconsin is enormous.  Roughly 45% of Wisconsinites claim German heritage (compared to the rest of the United States which claims 17% on average).1  The first wave of Germans in any sizable number began in the 1830’s.  At this time Germany wasn’t even a unified country, just a series of duchies and principalities that shared a common language.  But Germans were attracted to Wisconsin due to the wide availability of fertile farm land and the natural resemblance the Wisconsin landscape had to their own beloved Germany.  Soon, Germans established themselves all over Wisconsin, but congregated mostly in south-eastern Wisconsin; communities like Racine, Kenosha, and Milwaukee became centers of German culture and influence.  They brought their customs, traditions, and holidays with them from the Old Country, and strengthened their communities by opening their own schools and churches.  Brewing became a trademark occupation of Germans in Wisconsin, and names such as Pabst, Schlitz, Blatz, and Miller, all come from German families that settled in Milwaukee. 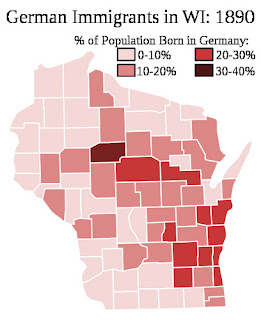 In other parts of Wisconsin, the Polish, Scandinavians, and Irish established themselves.  When Wisconsin earned it’s statehood in 1848, the state’s constitution was published in English, German, and Norwegian to meet the needs of this citizens.2  Margarethe Schurz, a German-born woman that moved to Wisconsin, opened the first United States Kindergarten (conducting class in German) in Watertown, Wisconsin in 1854.  German immigrants had became so populous in Wisconsin, that they formed their own infantry regiment during the Civil War, the 9th Wisconsin Volunteer Regiment.  But when the English-bred Yankees came in from New England, they targeted the wide-spread Germans in their crusade to homogenize American culture. In 1889, the Bennett Law was passed in Wisconsin that required the teaching of all school subjects in English – public or private.  Some towns only spoke German.  Many Lutheran and Catholic parochial schools were operated by Germans, and their preferred medium was German.  The new law incised many previously non-political rural Germans and the law was struck down in 1891 by newly-elected Democrats voted into place by the German population.  Anti-German sentiment was growing and hit a fever-pitch during WWI, when sauerkraut was renamed 'Liberty Cabbage' and many German families changed their last names to sound more English.  The second-largest brewery in the United States, Miller, was originally Müller.  And the influence didn't end at the turn of the 20th century.  Milwaukee, with it's high German population, was a beacon of Socialist politics in the early 1900's.  The Sewer Socialists (so named because of the excellent infrastructure they maintained) kept a Socialist mayor in Milwaukee from 1910 to 1960!

My grandfather was born in Milwaukee in 1922, in the middle of the last big wave of German immigration.  He grew up on a small farm in LeRoy, Wisconsin, which was almost all German.  The road signs and newspaper was all written in German, and it wasn’t until WWII that English became the language of the land.  Grandpa August grew up speaking German with his family and neighbors.  I spoke to him recently about his childhood, speaking German in Wisconsin in the 1930’s.

Translation: In LeRoy – a small town – most of the people were German and they all spoke German.  However, with the end of the [Second World] War, English was really most spoken.  I learned everything in English in the eight years I spent at the Catholic school, with the nuns – not people from the street – they were all nuns.  The school was in Racine, Wisconsin.  When you’re older, then you are always forgetting more and having more difficulty speaking the language.  We go to Germany, and then in three or four days of speaking German with the people, then it always comes back again.

Today, there are a number of German-medium schools in Wisconsin, including the private Deutsche-Amerikanische Kulturvereinigung Schule and the Milwaukee German Immersion School, which is a K-5 school in the Milwaukee Public School system.  Because of Grandpa's upbringing, he caught the attention of Joseph Salmons, a professor at UW-Madison researching native German speakers from Wisconsin and their influence on modern Englis.  Using his band of merry grad students, Salmons records and gathers speech from German speakers all over the state.  From this, we can see how German (as well as Polish and Norwegian) has influenced the way modern English is spoken in Wisconsin.  It is fascinating research, and if you'd like to learn more, check out the Wisconsin Englishes website.

Nowadays, the influence of the German immigrants and their culture can be found all over Wisconsin.  From bratwurst to beer, to polka and even our language, Germans have made Wisconsin what it is today --  a great state with a wonderfully rich heritage and culture unlike any other in the country.  Prosit!
Posted by Greg at 8:30 PM