Wisconsin has a reputation for being the land of beer and cheese (as evidenced by some of our previous blog posts), however, Wisconsin is also a great place to be active and outdoorsy. To celebrate the active side of Wisconsin, we're launching our "Active Wisconsin!" series in which we'll highlight some of the cooler things that one can do out-of-doors in the Badger State.

Recently, I hit the dusty roads of Madison with a posse of friends. We spent the day biking around the city in search of Frank Lloyd Wright's iconic architecture. Wright is famous for a style deemed "organic architecture" because of his use of natural materials and the way in which his buildings worked harmoniously with their surrounding environments.

Frank Lloyd Wright was born in 1867 in Richland Center, Wisconsin. Wright spent most of his early life in Madison and attended the University of Wisconsin. As a result, Madison has a high concentration of buildings designed by FLW.

All in all, we peddled 17 miles, made 10 stops, and had one lousy (albeit, well-timed) flat tire. It was a really fun day of biking and getting to know Madison in an interesting and intimate way. For anyone interested in biking our route, please feel free to consult this map.

Our first stop was the Robert Lamp House (22 North Butler Street). This house is unique because it was built in the middle of a city block and is surrounded by residential properties on all four sides. We had to shimmy down a narrow back alley in order to get this picture. The Robert Lamp House is thought to be one of FLW's earliest examples of the Prairie Four-Square plan.
Next, we hit up the iconic Monona Terrace on beautiful Lake Monona. FLW designed the plans for this building in the 1930s and proposed it to the Dane County board in 1938. It was denied in 1938 and was set on Madison's back burner for much of the twentieth century. Finally, in 1992 the Monona Terrace was approved for construction and the convention center opened it's doors in 1997. Today, it's a beautiful place to listen to music (check out the FREE Concerts on the Rooftop Series), attend events (like the Wold Champion Cheese Contest), and bike along it's lakefront on one of Madison's paved bike paths.
We peddled around the capital and found ourselves at the former site of the Lake Mendota Boathouse (Lake Mendota at N. Carroll Street). This plaque gives you an idea of what the boathouse looked like in it's heyday. Built in 1893, the boathouse was later demolished in 1926 because it had fallen into disrepair.
Here's a lakefront view of where the Boathouse once stood. After cooling off in the lake breeze for a couple of minutes, we hit the lakeshore bike path and bombed over to our next stop on the tour.

We biked into the picturesque University Hills neighborhood to get a glimpse at the Eugene Gilmore House (137 N. Prospect Ave). Also known and the "Airplane House," FLW designed this home in 1908 for University of Wisconsin law professor, Eugene Gilmore.

This home features grand overhanging eves and is perched atop a large hill in the University Hills neighborhood. FYI: peddling to this house takes some muscle power, but coasting to the next destination is pretty fun and fairly effortless!

The First Unitarian Meetinghouse is one of the most impressive buildings on the tour (900 University Bay Drive). FLW's use of glass and brick creates a striking (and surprisingly natural-feeling) architectural effect. I found the slope of the roof in the sanctuary to be both dramatic and awe-inspiring.
If you walk around the back of the building, you can get a peek at the magnificent organ inside of the sanctuary.

Inside of the First Unitarian Meeting House, natural light creates a beautiful feeling of placidity.

Our next stop was the John C. Pew House (3650 Lake Mendota Dr). The Pew house was built between 1938-1940 and features cantilevered balconies. FLW's ability to seamlessly mesh architecture with nature is made evident by the Pew house-- this home straddles a small creek and is nestled in a wooded neighborhood near lake Mendota.

After visiting this house, we discovered that one of our buddies had a flat tire. We used this opportunity to grab a bite to eat and fix the bike. If you decide to grab lunch at this point in the tour, I would suggest taking a picnic to one of the parks located nearby (Spring Harbor Park is a six minute bike ride from the Pew House) or visiting one of the many restaurants in the area. One of my favorites is the Great Dane Pub near Hilldale (a 10 minute bike ride from the Pew House). The Great Dane has excellent fare and refreshing brews.

The seventh stop on the tour was the Jacobs' First House (441 Toepher Ave). This home was constructed in 1936 for Katherine and Herbert Jacobs. The couple asked FLW to design two homes for their family while they lived in Madison. This is the first home they commissioned (the second home is the tenth stop on the tour). The prairie in front of this home really complements the low, parallel lines of the roof and FLW's Usonian architecture. This home was restored in 1983 and was one of the most beautiful privately-owned homes we observed on the tour.

Next, we visited the Walter Rudin House. This home was constructed in 1957 and features extensive glass work in the front of the house. The living room of this home is two stories tall and surrounded by two glass windowed walls (as seen above).
The parallel lines established by the living room windows continue all the way around the exterior of the home. Here, the garage roof and entryway keep consistent with the theme.
Our penultimate destination was the Van Tamelen House (5817 Anchorage Rd). This was one of the most private homes we visited on the tour. From the road, you can only see a small sliver of the house (but get a load of that sweet lamp at the end of the driveway!). Build in 1956, the Van Tamelen House also features Wright's Usonian design and is an example of his prefabricated homes (for more information on FLW's prefabricated homes, please click on the link above).
We mustered up the gumption to get close enough to snap a couple of photos. Here's a quick peek at the exterior of the Van Tamelen House.
Finally, stop number ten! We rolled up to the Jacobs' Second House as we rounded out mile number 17 on our bike trip (3995 Shawn Trail). This home is a beautiful example of FLW's "solar hemicycle" design. The southern wall of the home consists of a giant 14 foot tall wall of arced glass. This glass wall allows the sun to shine in and partially heat the home. The north, east, and west walls of the home feature earth reinforcement that protects against Wisconsin's cold winter winds and also helps maintain steady temperatures year round.

By the time we arrived at Jacobs 2 it was around diner time and the owners were enjoying a meal in their front yard. We didn't want to disturb the couple and we felt a little sheepish walking down the driveway to take a photo of their home. However, we were able to snap this little gem from the road (above). Here you can see the beautiful Usonian garage that corresponds with the Jacobs' Second House. For more information and additional photos of the solar hemicycle house, please see this link. 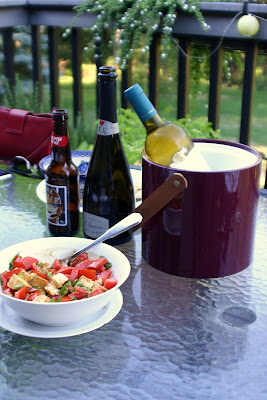 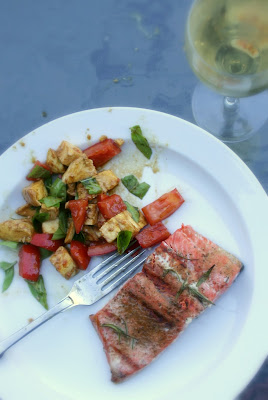 We finished the trip by cracking open a couple of bottles of wine and having a delicious dinner of grilled salmon and caprese salad served al fresco! It was a lovely way to spend a Sunday afternoon in Wisconsin. For those of you who are lovers of architecture (or for those who simply want to see more of Madison in an intimate and active way), hop on your bike and spend a day hunting down Frank Lloyd Wright's beautiful architecture.
Posted by Erin at 4:34 PM