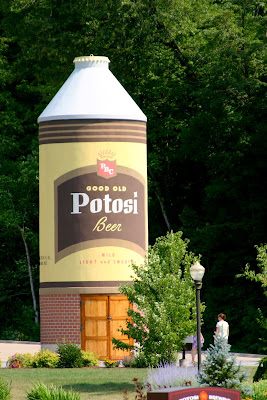 Wisconsin is known as the Dairy State, and for good reason.  But the one thing we are known for after cheese is, of course, beer.  The link between beer and Wisconsin has been constant since the Germans established our brewing cred in the 1830’s.1  Almost every town of some size had a brewery at one point, and beer meant business.  By the end of the 19th century, Sauk County alone accounted for 20% of the hops being produced in the world 2  and even though the brewing industry hit an all-time low in the 1970’s, Wisconsin’s brewing industry has risen like a phoenix from spent malt.  Wisconsin now boasts over 60 breweries, putting us 7th nationally for total number of breweries (9th for breweries per capita).3

In this great tradition, More Than Curds will be touring breweries all over this great state (and, I’m sure, a few outside of Wisconsin too).  So what better place to begin our brewery tour series than good ol’ Potosi.  Not only is Potosi one of the oldest breweries in Wisconsin, but it is also home to the National Brewery Museum.  I went down there with some friends on an especially hot 4th of July to visit this Wisconsin gem.

Potosi Brewery was founded in 1852, only 4 years after Wisconsin earned its statehood.  By the mid-20th century, the excellent quality of Potosi’s beer made it the fifth-largest brewery in Wisconsin.  Unfortunately, the old brewery closed in 1972, but while rebuilding the brewery in the mid-90’s, the American Breweriana Association’s selected Potosi as the home of their National Brewery Museum, much to the chagrin of Milwaukee and St. Louis.  The new brewery opened in force in 2008 and has been serving up some great brews ever since. 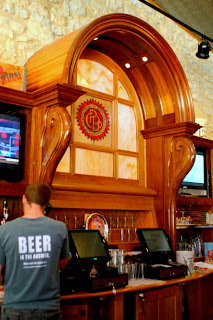 They had six to sample at the brewpub -- Good Old Potosi (light lager), Potosi Pure Malt Cave Ale (English Pale), Wee Stein (Witbier), Potosi Brown Ale (brown ale), Snake Hollow (IPA), and Fiddler (oatmeal stout).  All were excellent, but my buddy Dave and I agreed that the Snake Hollow and Wee Stein stood out above the rest.  Considering the (modern) brewery has only been up and running for four years now, we were both impressed by the quality of the beer and by the facility itself.  The brewpub was an excellent mix of tradition (such as the hand-carved bar made by local Potosians) and modernity.  The brewery is headed by Steve Buszka and is producing 3,000 barrels a year.

The museum is impressive.  Not so much about the history of brewing, but a look at the history of breweries.  They had memorabilia from breweries all over the United States with a particular focus on Wisconsin.  Also featured was Potosi’s “Rolling Bar”, a mobile pub that roamed the thirsty Driftless Region of southwest Wisconsin (colloquially known in the 1800’s as “Valley of the Drunken Men”).5
Potosi is an excellent day trip.  The beer may not be the most inventive or unique, though they have started rolling out some experimental brews (Tangerine IPA, anyone?).  But their selection is solid and delicious.  And besides--what other museum will let you roam the halls with a pint in hand?